BADMINTON ASIA SIGNED AN AGREEMENT WITH BEYOND BOUNDARIES 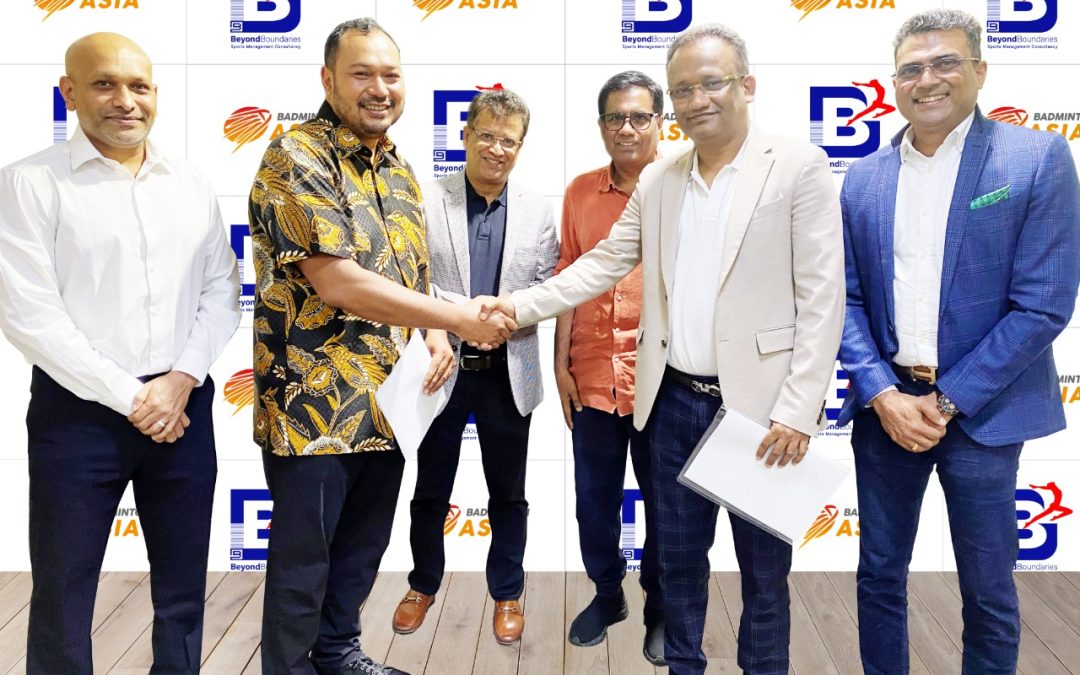 The deal signed on 22nd June 2022 in Singapore, ahead of World Badminton Day is a strong indication of Badminton Asia’s intentions to conduct international tournaments in one of the Middle East’s fastest-growing sports hub – Dubai.

Badminton Asia, is the governing body under the umbrella of the Badminton World Federation (BWF), formerly known as the International Badminton Federation, founded in London on 5th July, 1934.

The Badminton Asia Championship is held every year to crown the best badminton players in Asia. The tournament was first held in 1962 with Kuala Lumpur as the venue and has been held every year since 1991.

Expressing his delight, Mr. Anton Subowo, President of Badminton Asia, remarked, “Badminton is one of the most popular sports with an all-time high participation and fan base. It will be exciting to host the Badminton Asia Championships in a new arena.”

Mr. Moosa Nashid, Secretary-General of Badminton Asia added, “Badminton as a sport offers great value in terms of mental and physical discipline. This agreement has sealed a great way of promoting the sport in UAE and Middle East.”

Badminton Asia Championships is a very crucial event because it acts as the qualifying window to the prestigious Olympics Games. It also gives players the opportunity to qualify for world badminton championships like Sudirman Cup, Thomas and Uber Cups and other major tournaments.

Dubai is already equipped with highly advanced sports infrastructure and facilities, making the city a much-preferred destination for hosting a wide array of world-class sporting events.

Dr. Sathya Menon, CEO of Beyond Boundaries said, “This will be the first time that Badminton Asia Championships will be conducted in Dubai, and as their local sports management partner, our team of sports experts is very much looking forward to delivering world-class experiences for this international event.”

“Badminton Asia Championships has a huge fan base and we are pleased to work in close cooperation with an esteemed governing body like Badminton Asia,” added Mr. Jayesh George, Director of Partnerships & Alliance at Beyond Boundaries.

Mr. Prajeet Pareparambil, Director of Operations further added, “The Badminton Asia and Beyond Boundaries partnership has sealed a great way of hosting this important sports event in Dubai.”

Mr. Mahendra Kapoor, Managing Director of Lining Sports remarked, “Being a part of such a valuable agreement has been an absolute pleasure. Everyone is waiting for this new chapter to begin.”

Many top shuttlers from all over Asia will be joining the competition to earn points to raise their Badminton World Federation (BWF) ranking. This will also allow badminton fans to witness and rejoice for their favourite players.

Badminton has evolved into one of the most engaging and preferred sports to watch on television, with a global reach in excess of 600 million households and a potential reach in excess of 1.8 billion individuals across 115 countries. The Badminton Asia Championships are broadcasted in a large number of countries across the world.

Every year, badminton is gaining a significantly increased viewership record on TV. While football remains the number one sport watched on TV, badminton has rapidly spiked up to feature among the top four in the world. In Asia alone, badminton is the most-watched and played sport.

The Badminton Asia Championships are live streamed across numerous prominent television channels. Several online streaming platforms also serve as mediums for viewing the tournaments. Short form tournament related videos like “Play of the Day”, and “Highlights” are some of the most watched sports content on digital platforms.

The Badminton Asia Championships consist of Individual, Team (men, women, both), and Mixed Team championships where top shuttlers from China, Japan, Indonesia, South Korea, Philippines, India, Singapore, Malaysia, and other Asian countries compete with each other for the much-coveted titles.

The last Badminton Asia Championships which was the 39th edition was held in the Philippines from April -May 2022, and witnessed world champions like Kidambi Srikanth, PV Sindhu, Saina Nehwal, Lakshya Sen, Satwiksairaj Rankireddy, and Chirag Shetty among several others.

No comments to show.